I used to blog on another platform. Check out what I shared in earlier years here.

WOWWW! The Term has just ended. Which means it’s the HOLIDAYS. Not only that, but I can’t believe I’ve been a year 8 for a term already. This term feels like it went by fast. It feels like yesterday was the first day back at school. Even though we didn’t do the usual things this term considering covid, there are still many memories that have been made. Here are my stand out memores of the term.

First of all Team 5’s trip to Willow Park is one of my favourite memories ever. Not only did I get to spend a whole day with my friends, but we also did some cool activities. I mean we got to spend 1 hour at the beach, which was hot, but also nice. I also got to play in their huge Rec Centre and eat some delicious food.

Another huge memory was the school Disco. The Prefects and House Captains got to throw a Disco. It was really fun and cool. We got to play some awesome songs, and do some dance offs. Not only that, but we also got to do 2 karaoke songs. I really enjoyed doing the Disco because I got to jam with my friends and also just have fun.

The assemblies have also made huge memories for me this term. Each and every single assembly always has a funny moment in it. My favourite one would have to be when we did snack time super heroes and Petero dropped the box leaving all the names on the ground. Also working with the group of people I have has been amazing. Can’t wait for whats to come next term with the assemblies.

Sport is another one. Even though we didn’t get to play sports tournaments this term, we did do our own version.We had Softball,Tag and Netball. Mostly Wednesday and Friday we got to have our own tournaments with just the Year 7’s & 8. We also did Boys verses Girls which was actually fun. We played Softball and Netball for our little tournaments. It was also cool to see the boys play netball considering they don’t play that type of sport. Overall I had fun at all those games. I can’t wait for all the sports tournaments to come. Especially the netball season.

My final memory would have to be our fun day on Tuesday. Each class got to do something different in the morning with each of there own class members. My class pretty much had free time for the whole morning. We played board games and just went on some walks around the school. I also went into Room 1 where they kindly offered me some of their snacks and drinks. In the middle block we had a choice of either watching a movie or play sport. I was actually the only girl that was at sport. The sports we played were Basketball and Touch. I really enjoyed doing sports even though I was against all boys, which did challenge me a bit. In the last block we got a choice again whether we wanted to continue watching the movie or capture the flag. I chose to do capture the flag and had a BLAST! Obviously my team had WON the game.

So there you have it. Even though Covid was happening in the middle of everything, I still made some awesome memories. From the Willow Park trip to our fun day, nothing could stop these things from happening. I’m going to really miss being at school for the next 2 weeks. I am so thankful for the Team 5 teachers for making this term a FANTASTIC term. I am still very sad that this term has ended because that means I got 3 more terms left. I can’t wait to see what’s there to come next term. Hopefully it’s just as fun as this term. 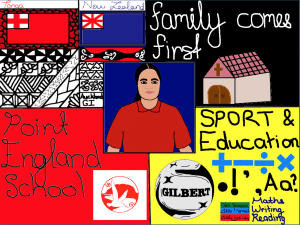 This is my Visual Mihi for this term. It is also my DLO. I had been working on this for the past 11 weeks of school. I have 4 sections for my Mihi, The first is my Culture which means a lot to me. The second being about family and church. The 3rd and 4th are about school. The 3rd one being of my school and the last one about my education and sport. I really enjoyed doing this for the term. ENJOY!

About Me | Ko Wai Ahau

Add the link to the About Me blog post here.

Keep connected with this blog